In April and May of 2015 a series of earthquakes struck the Himalayan region of Shindupachuk. This area while close to the capital Kathmandu  it is still largely undeveloped due to accessibility. 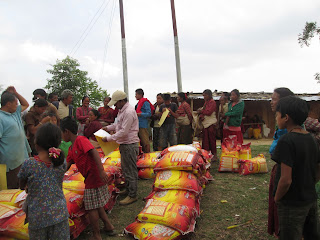 In response the Himalayan Foundation have concentrated their efforts on the village of Guncha, located approximately 60 km north of Kathmandu  where  45 people lost their lives and 65 more were injured. Socigraphically Guncha is home to approximately 645 families with the average size being seven, children, parents and grandparents included. The local economy revolves around farming, however due to the terrain it is only possible to grow enough for themselves so yearly income is low at $500 USD per family.  For economic growth family members migrate to neighboring countries, particularly India to seek employment at the age of eighteen years.
Educationally the children are at a deficit, while all government and privet schools within Nepal follow a strict curriculum the local school provides classes one to eight.  The average student leaves after class five. For future studies leading to greater employment opportunities it is necessary to attend up to class 10 and pass the SLC (school leaving certificate) exam.  However this requires sufficient funding, an area Himalayan Foundation hopes to expand in with the child sponsorship program.

In response to the earthquake the immediate action undertaken was to provide tempory shelter. This was a hazardous procedure due to the road being nonexistent closely followed b y the start of the monsoon. Difficulty of access was a largely contributing factor resulting in this area receiving little aid from the lager organizations. However with your support we were able to provide the following resources:
Things have been challenging due to the fuel prices, and this has had an adverse effect on the rebuild of the earthquake affected zones to date.

The long term plan for Guncha 2016 -
Our first priority is a Better Toilets Program  as an initiative of the VDP (village Development Program)
Since the April 2015 no permanent toilets have been established in Guncha and several of the surrounding villages. As a result a large number  of people displaced from homes face health risks for themselves, while polluting the mountain environment used primarily as agricultural land.
The VDP typically involves the construction of four safe public toilets per allocated funding.
Our immediate  aims are:
-          3 allocations of funding providing 12 public toilets in Guncha
-          Repairing the local school toilet
-          Reach outlying villages, Cotgow and Lekharhe with one VDP allocation respectively.
To undertake these projects we need sufficient funding with each allocation for construction requiring $450 USD. Upon receiving founding construction is commenced and supervised by the village leaders.

Tempory housing – simple tin construction for the short term use of displaced families . 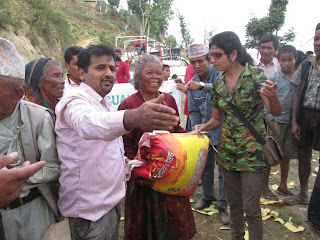 Posted by Himalayan Foundation Nepal at 05:14 No comments: